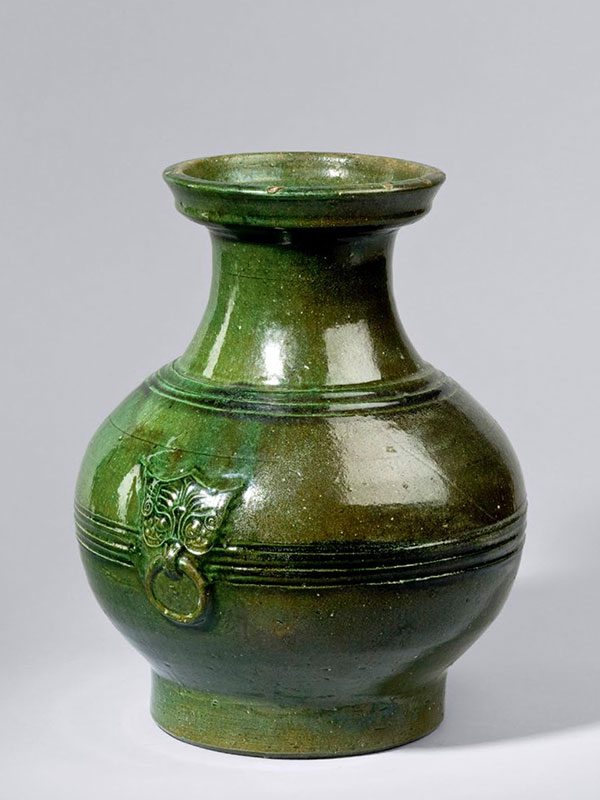 A pottery vase, hu, of baluster shape, supported on a tall foot and flaring outwards at the neck, which terminates in a stepped mouth. The body is divided into three horizontal sections by two sets of grooved lines, around the shoulder and the belly of the vessel. The body has a large taotie mask in relief to either side, each with a mock ring handle. The vase is covered in a deep, glossy green glaze, leaving only the interior unglazed and revealing the reddish pottery body.

The prototype of this pottery vase is derived from an archaic bronze hu vessel of the Warring States period (475 – 221 BC), as indicated by its low-set, pear-shaped body.  The metallic effect created by the iridescent green lead glaze also corroborates this theory.  Pottery made during the Han dynasty provides a valuable insight into the social and financial context of China. Burial objects such as the present vessel were made of soft earthenware and applied with a low-fired lead glaze, which was poisonous and therefore unsuitable for daily use. Such a low-fired lead glaze, with copper as the colourant, was fired in an oxidized atmosphere at around 800°c, and is one of the remarkable inventions of the Han potters. It laid the foundation for the later development of glazing techniques in China.[1] Similar green-glazed hu vases dated to the Han dynasty, comparable in shape, size and decoration, are respectively in the collections of the Metropolitan Museum of Art,[2] the British Museum,[3] the Fitzwilliam Museum,[4] and the National Museum of History in Taiwan.[5] A further comparable green glazed pottery vase, excavated from a Western Han tomb in Luoyang in 1953, is in the collection of the Henan Provincial Museum.[6]