Qingbai porcelain figure of Manjusri on a lion 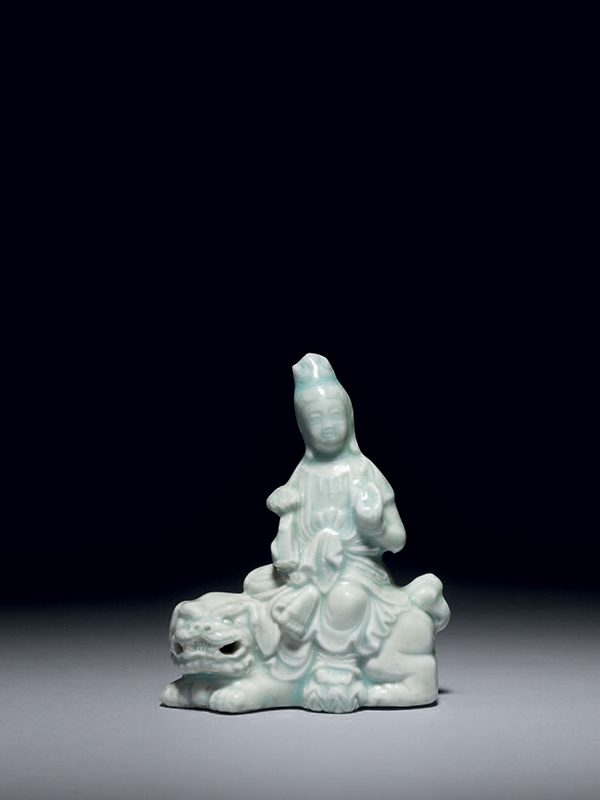 A small porcelain figure of Manjusri seated on a lion in a pose of royal ease. Manjusri is dressed in loosely draped robes that cover most of the body and arms, and that are neatly tied up with a knotted sash and falling into rhythmic pleats. He raises his left hand up in abhaya mudra, the hand gesture indicating ‘fear not’, whilst his right hand holds a ruyi sceptre. The head is slightly downcast and his neatly arranged hair is covered by a cowl. The face has a benign expression. He is seated on the back of a recumbent lion with his right foot raised, whilst his left foot is pendant; this is known as the pose of royal ease, lalitasana. The lion has its four legs tucked underneath its body and turns its head toward the front with a well­-defined, alert facial expression. The figure is covered in a transparent glaze of pale blue hue, leaving only the base unglazed and showing the fine-­grained white porcelain body.

Manjusri, also known as Wenshu­shili or simply Wenshu in Chinese, is regarded as the Bodhisattva of Wisdom and Protector of Learning in Mahayana Buddhism. He is usually regally seated on a lion­dog and wears princely jewellery. Instead of holding a flaming sword in his right hand as popularly depicted in India, the sword is replaced with a ruyi scepter in Chinese and Japanese Buddhist art.[1]  A comparable cizhou ceramic figure of Manjusri, dated to the Jin dynasty (1115-1234) and holding a ruyi scepter in front of his chest, was excavated in 1972 from a hoard in Handan city in Hebei province and is now in the collection of the Office for Management of Cultural Relics of Fengfeng Mining District.[2] Qingbai porcelain Buddhist figures are very rare. A much larger qingbai porcelain Guanyin figure, dated to 1251 AD according to a mark on its base, is in the collection of the Shanghai Museum.[3]  A qingbai porcelain seated Buddha figure of comparable size and dated to the Yuan dynasty is in the collection of the Royal Ontario Museum.[4]