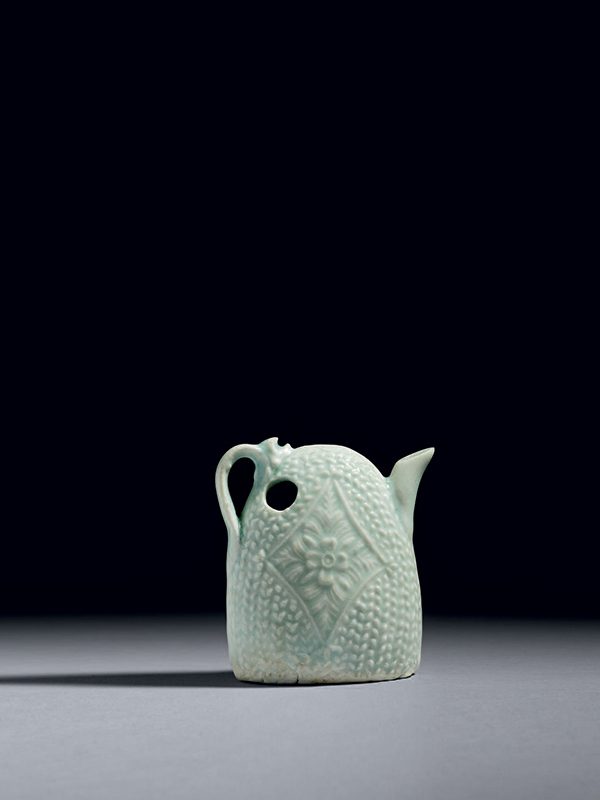 A qingbai porcelain water dropper in the form of a small ewer with a domed top.  The water dropper is constructed in two parts that are joined together and a short spout and a small loop handle are applied to opposite sides. On the shoulder to one side there is a small circular aperture that allows the ewer to be filled. Both sides of the body are moulded with a decoration of a flower blossom within a diamond shaped cartouche, against a background of raised dots. The exterior of the water dropper is covered in a pale blue glaze that stops just short of the flat base, which is unglazed and has characteristic reddish­-brown firing marks.

Small, lidless ewers such as this example were used to slowly pour drops of water onto freshly ground ink, to produce a mixture suitable for painting or calligraphy. Although it is not uncommon to find water droppers covered with a qingbai glaze, the raised dots decoration seen here is rare. This raised dot decoration, known as fish-­roe pattern or pearl pattern in  Chinese, is an imitation of the raised dots on gold ornaments that were especially popular during the Tang dynasty (618-906).[1]  Two closely comparable Song­-dynasty qingbai water droppers of similar form, and decorated with diamond shaped cartouches on a raised dot ground, were excavated from the Hutian kiln site in Jingdezhen.[2] A water dropper of very similar form and decoration is in the Muwen Tang Collection.[3]