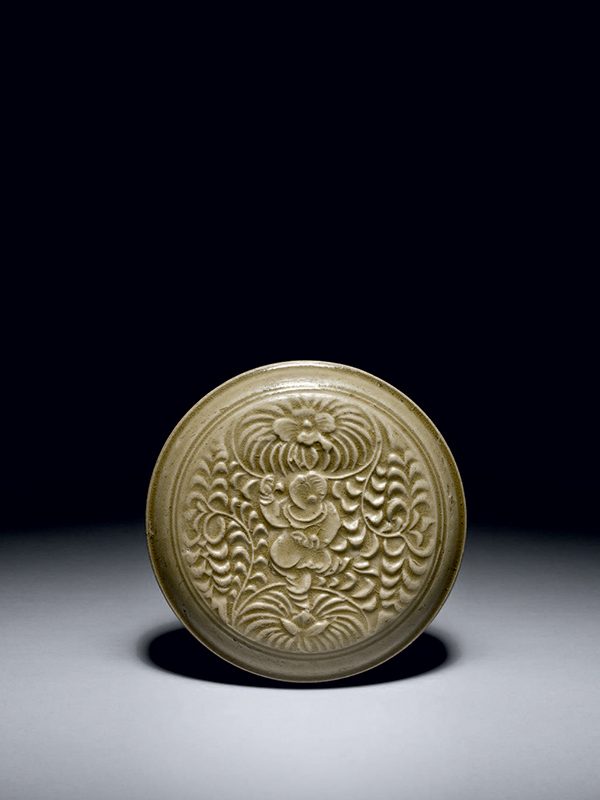 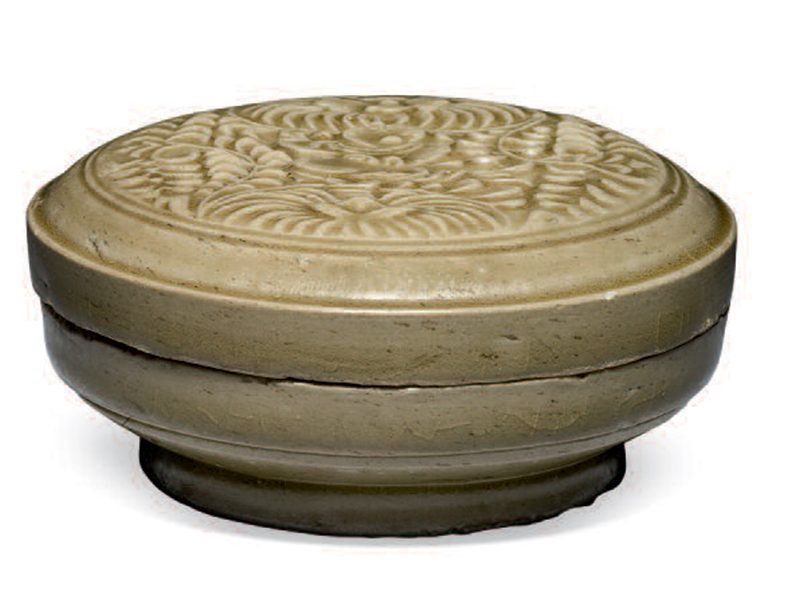 A stoneware box of circular form, supported on a short, flared foot. The short, straight sides taper towards the slightly domed cover. The top has a deeply impressed central design of a small boy dressed in a tunic. He stands on top of a blossomed chrysanthemum, with his head and right arm lifted up, and looks at another chrysanthemum above his head. Scrolling vines with sickle­-shaped leaves fill in the space and encircle the boy. Both the interior and the exterior of the box are entirely covered in a translucent olive­-green glaze, which pools to a slightly darker tint in the recesses, leaving only the rims unglazed and revealing the greyish stoneware body. The base has clusters of kiln grit adhering.

This exquisite stoneware box is a fine example of later Yue wares that were produced between the Five Dynasties and the Northern Song dynasty. Yue wares, a term that covers most early celadon wares, developed slowly over a period of about one thousand years, from the Han dynasty (206BC ­ 220AD) to the early Song dynasty. The central yue kiln sites are in the Shanglinhu region in Zhejiang province.[1]  Yue wares produced during the Five Dynasties and the Northern Song dynasty have many characteristics in common with their predecessors, such as the greyish body and the production methods.[2]  A practically identical yue stoneware box impressed with a boy playing among flowers and dated to the Five Dynasties, around the 10th century, is in the Sir Herbert Ingram Collection at the Ashmolean Museum in Oxford.[3]  Another yue stoneware box with floral stem decoration only, also dated to the Five Dynasties, is in the same collection.[4] A further comparable yue stoneware box impressed with a phoenix among flowers and dated to the Northern Song dynasty, was excavated from Shanmen County in Zhejiang province in 1986, and is now in the collection of the Shanmen County Museum.[5}