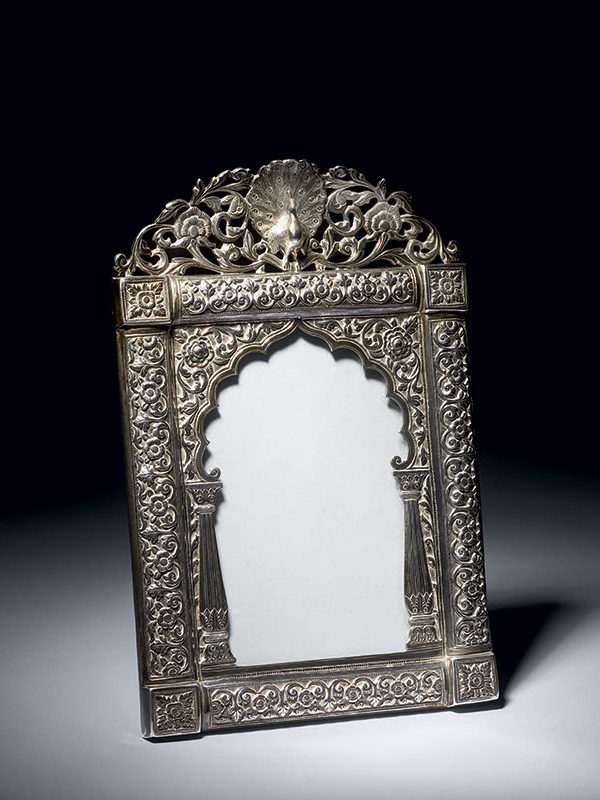 A hammered and etched silver frame. The central area for inserting the image is contained within a cusped mihrab arch with columns to either side. The spandrels on either side of the mihrab contain arabesque sprays of stylised flowers. A simple slightly convex border frames the central scene and is decorated with further arabesque sprays of stylised flowers. This rectangular frame is crowned by a semi­circular open­worked floral scene with a peacock showing its feathers in its centre. The back is of plain silver which slots into the front part on the bottom corners, the top two corners have two simple turning knobs to secure it. A large hinge is fixed to the  back to enable the
stand to stay upright. A sheet of glass is fitted inside the frame to protect the image.

Kutch is a district in Gujarat state in Western India. It is a remote and sparsely populated area with an interesting history;  it is where the Indus Valley Civilization developed between 2900 BC and 1900 BC. Much later, in the 13th century, it became an independent kingdom until the independence of India in 1947. In 1815 Kutch became a British protectorate and ultimately the princely state of Kutch, whose local ruler acknowledged British sovereignty in return for local autonomy. The art produced in Kutch has a unique style of absorbing traditional Indian motifs into European decorative designs. Kutch silver is distinguished by its closely worked, foliate, repoussé and chased designs. The design of Kutch silverware, like most silver produced in India, was always worked from the outside. Once the often high quality silver was hammered into the desired shape, the piece was filled with kil, a mixture of resin and wax, which prevented the object from cracking under the repetitive blows of the artisan’s tools. The design was lightly etched, after which the artist would punch the background of the pattern using small, elongated hammers, leaving the design in relief. After this the wax was heated and poured out. The object was heated to a red­-hot temperature and then cooled quickly in water. This process, called annealing, strengthened the silver allowing the artist to continue his design in finer detail without damaging the material.[1] Sometimes this process was repeated.