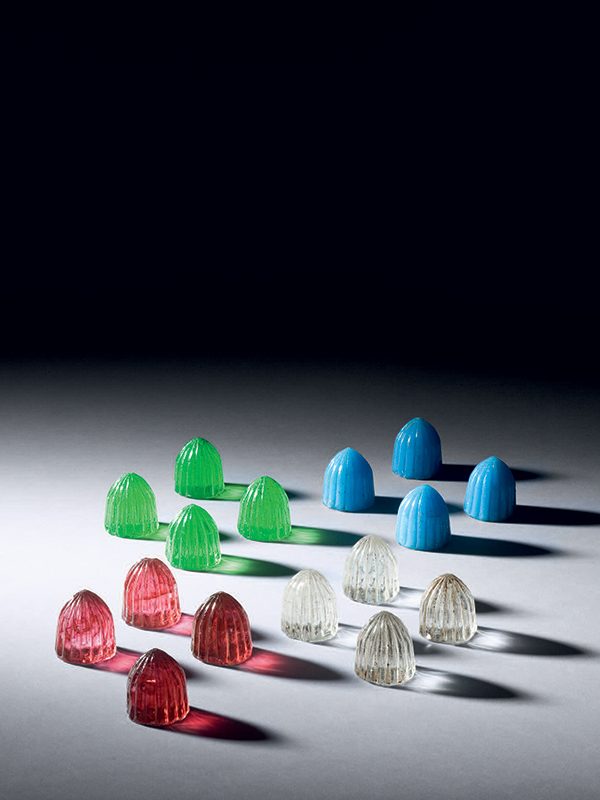 A parchesi game set, containing 16 beehive­ shaped game pieces made of coloured glass. Each piece is of domed ribbed shape and has a flat base. The set is divided into four groups of four pieces, each with a different colour; one set is ruby red, another bright green, one is pale blue and the last is made of clear glass.

This is a complete set of 16 parchesi pieces. The game is more commonly known as pachesi, or chaupad. The playing board is cruciform with a square in the centre, called the charkoni, the starting and finishing position of the pieces. The four arms are divided into three columns of eight squares. The player’s  pieces are moved along these columns during play. Pachesi, sometimes referred to as ‘twenty­-five’, is played by four players, usually in two teams. One team has red and green pieces, the other white (clear glass) and blue. Each player has four game pieces of the same colour. The team that moves all its pieces to the finish first wins the game. The game is played with six cowrie shells that are thrown from the player’s hand. The number of shells which fall with their opening upwards indicate how many spaces the player may move. Long rectangular dice pieces are also commonly used instead of shells. Pachesi has often been referred to as the national game of India. Although its origins remain uncertain it is one of the most successful and long-­lived games on the Indian subcontinent[1]. The Emperor Akbar (1542 ­ 1605) had a fondness for the game and had outdoor boards laid out in flagstones of the courtyard of his palace at Fatehpur Sikri. In Europe a version of the game is known as Ludo. Comparable pachesi boards of cloth, and game pieces are in the Victoria & Albert Museum, London.[2]