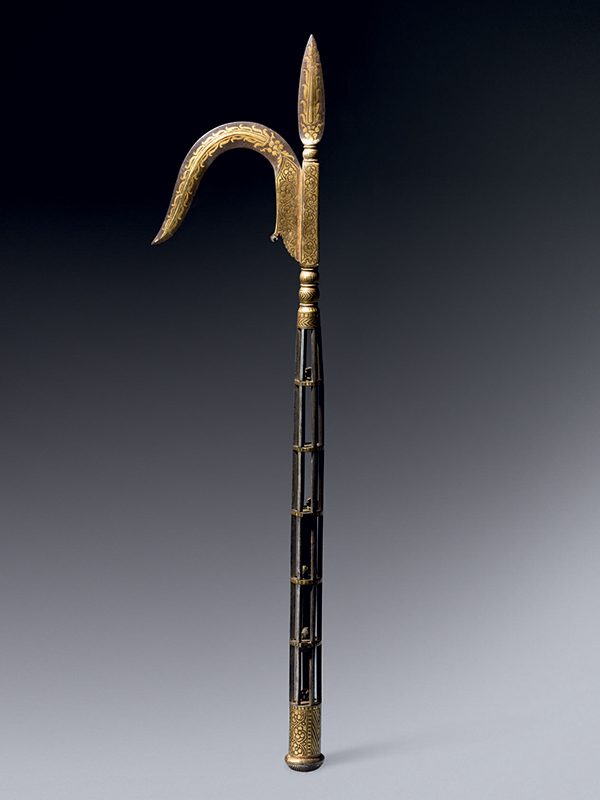 An iron Indian elephant goad, known as an ankusa or ankus. The round openwork shaft is divided into six sections. The shaft encloses a number of hollow metal jingles, which roll up and down when the weapon is raised or lowered. The shaft terminates into a slightly tapering, diamond­-shaped section. The elegantly shaped hook of the goad is gently curved. The ankusa is decorated with inlaid damascened gold in the koftgari technique. The hook and the top spike are decorated with a flame­like and scrolling flower pattern. Other parts of the ankusa are decorated in the koftgari technique with chevron designs.

The ankusa, a sharpened goad with a pointed hook, was the main tool for managing an elephant. It consists of a hook (usually bronze or steel), which is attached to a handle that can vary in length. The ankusa, or ankus is an ancient implement used from the fifth or sixth century BC onwards by a mahout or elephant driver to control his elephant. The hook is inserted into the elephant’s sensitive skin, either lightly or more deeply, to cause pain and induce the elephant to behave in a certain manner. Ankusas are found in armories and temples all across India where elephants march in religious processions and perform in various civil capacities. They can be quite ornate, being decorated with gemstones and engravings, appropriate for the ceremonies in which they are used. In south India the ankusa is a symbol of royalty, in Hinduism it is also one of the eight auspicious objects known as Astamangala and an attribute of many Hindu gods, including Ganesha. The dimension and weight of this ankusa, as well as the simple but elegant design suggest that it was made for use rather than for ceremonial purposes. Comparable ankusas are published by Elgood[1].  Ankusas with a similar hollow shaft with bells are in the Wallace collection, London[2].