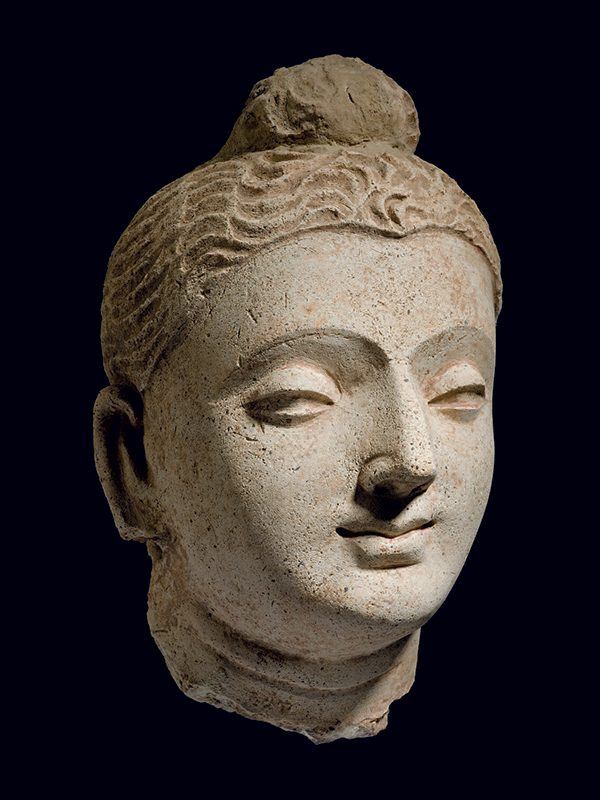 A stucco head of the Buddha, his wavy locks piled up on top of his head to form a rounded chignon. His face is framed by the slightly recessed hairline just above his forehead. The large almond shaped eyes, nose and mouth are carefully carved out, forming a round face with serene expression.The large pendulous ears reach to just above the Buddha’s shoulder, part of which is intact on the right­-hand side. The material is of a light terracotta colour and has elaborate traces of the original pigment.

This fine idealised head of Buddha is characterised by a powerful, serene gaze. He seems withdrawn, as if in contemplation, and has a faintly enigmatic smile. The rounded topknot, or usnisha, is typically associated with the Buddha.[1]  The general style is strongly influenced by Hellenistic sculpture. This head of the Buddha demonstrates the concern of the later Gandharan artists with the naturalistic modeling of features in realistic detail. The sculpture of Hadda is known for its use of materials such as stucco and lime plaster, and comprises only a relatively small number of carvings in schist and soft limestone. Because of the freshness and vivacity of the modelling, stucco sculptures therefore appear much more moving and spiritualised than the somewhat stiffer and dryer manner in which Gandhara stone sculpture is often rendered. The technique of stucco was an invention of the late Hellenistic period in Alexandria, where gypsum was first used as a cheaper substitute for marble. As trade relations with the Roman West intensified in the early first century, the technique spread from there to Iran and India. Comparable examples of sculptures of the Buddha attributable to the Hadda region can be found in the British Museum[2], the Museum of Fine Arts in Boston[3], the Musée Guimet in Paris[4] and in a private collection.[5]