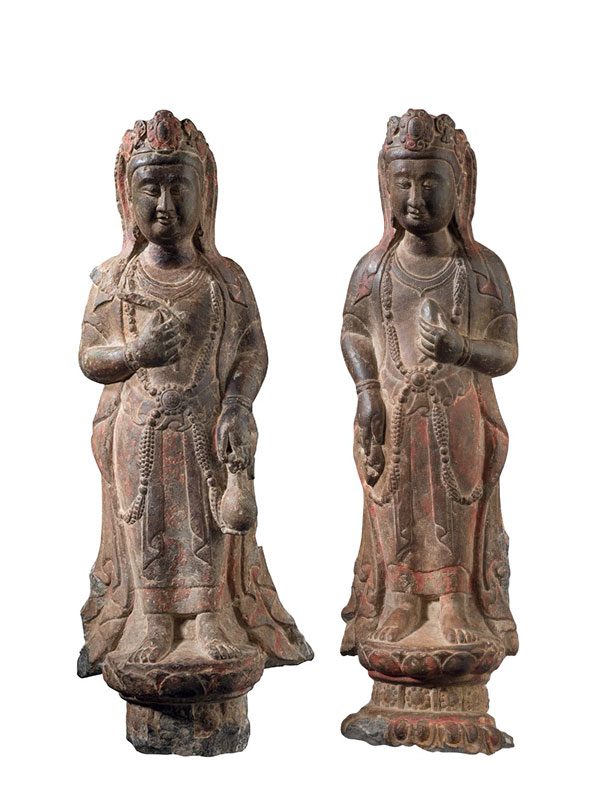 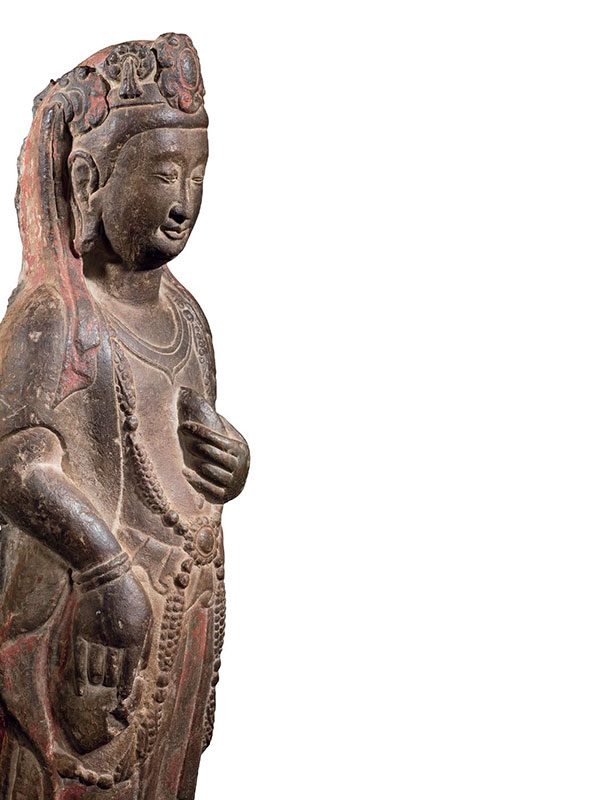 Two limestone sculptures of bodhisattvas, each standing on a tall, partly upturned lotus base. Both bodhisattvas are dressed in layered robes: the outer robe is loosely draped, falling into elaborate and rhythmic pleats on the shoulders and at the spreading hem; a belt is neatly tied and drops down into two long folds. A circular, disc-like necklace with a pointed end adorns their open chests. Another long necklace consisting of round and oblong beads is held together at the front with a beaded circular ornament. The head is crowned by an elaborate tiara, consisting of jewelled ornaments worked in the round,  from some of which issue tassels. Each face has a benign, compassionate expression.  The slightly rounded face has half-opened, downcast eyes, a strong, aquiline nose and a small, pursed mouth. The bare feet are revealed underneath the pleated hem.  One bodhisattva has the right hand half-raised holding a branch of willow against his chest, whilst his left hand lower down holds a water vessel kundika. The other bodhisattva has an opposite arrangement in hand positions; his left hand holds a lotus bud and the right hand holds a purse-like attribute. The grey stone is uniformly coloured and bears traces of reddish pigment.

These two exquisitely carved bodhisattvas with slightly rounded faces, downcast eyes and with their feet resting on upturned lotus pods strongly resemble Northern Qi dynasty (550 – 577) sculptures and judging by their symmetrical hand positions, possibly originally flanked a main Buddhist sculpture.1  Looking at the attributes they hold in their hands, they can be identified as Guanyin (Avalokitesvara in Sanskrit), known as Bodhisattva of Compassion. Stylistically, the type of carving and the general style of their costumes closely resemble sculptures from the Xiangtangshan Caves, Hebei province 2  A pair of closely comparable limestone sculptures of bodhisattvas, dated to the Northern Qi dynasty, are thought to be from the Xiangtangshan Caves. Another pair of bodhisattvas, similar in the symmetrical hand positions but both holding lotus buds in their raised hands and the other hands with a purse-like attribute, is in the collection of the Victoria and Albert Museum.3  A pair of much larger limestone bodhisattvas (c. 217 – 219 cm each in height), closely comparable in costume, adornments, pearl-crown, hand positions and the different attributes, is in the collection of the National Gallery of Victoria, Melbourne (fig. 1).4 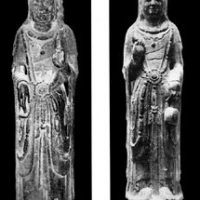