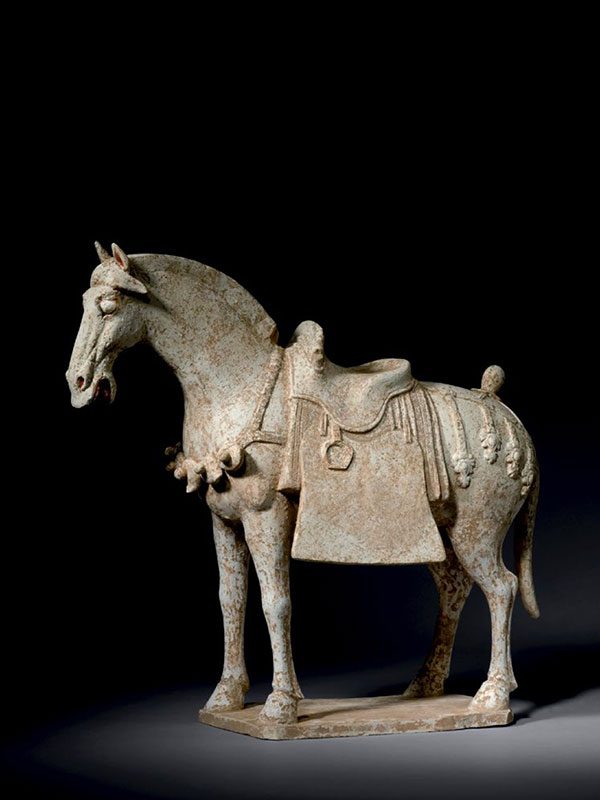 A white pottery model of a horse, standing almost foursquare on a rectangular base, which has canted corners. The horse has an extravagantly arched neck and finely cropped mane. The saddle, which rests on a folded blanket, has a high pommel and mud-guards and stirrups to either side. The well-modelled head has an alert expression, pricked ears and flared nostrils and the mouth is opened wide. The body is extensively decorated: the horse’s chest is adorned with a row of large tassels, the crupper is hung with elaborate apricot-leaf ornaments, and the horse carries a large cone-shaped rump ornament on its rear breech. The long, slender tail is combed straight down. The pottery is almost completely covered in a creamy-white slip, leaving some small traces of red and black pigments, mainly on the head.

This charming, beautifully detailed horse displays some typical features of the Sui to early Tang dynasty, such as the cropped mane, the finely arched neck, and particularly the long tail; a fashion carried over from the Northern Dynasties that continued to be a feature of early Tang sculpture. Warhorses on the battlefield, such as the present example, were adorned in full gear, the focus of which was the saddle.[1] The early use of stirrups, invented in China due to the higher pommel and cantle and still unknown in the West until the 10th century, was one of the major contributions the ancient Chinese made to world civilization.[2] A slightly smaller horse with comparable decoration, dated to the mid-7th century, is in the collection of the Royal Ontario Museum, Toronto.[3] A closely comparable Sui dynasty standing horse of similar size, but covered with straw glaze, is illustrated in Horses for Eternity: it is equally equipped with an elaborate saddle and with a pair of stirrups and is standing on a rectangular base.[4]