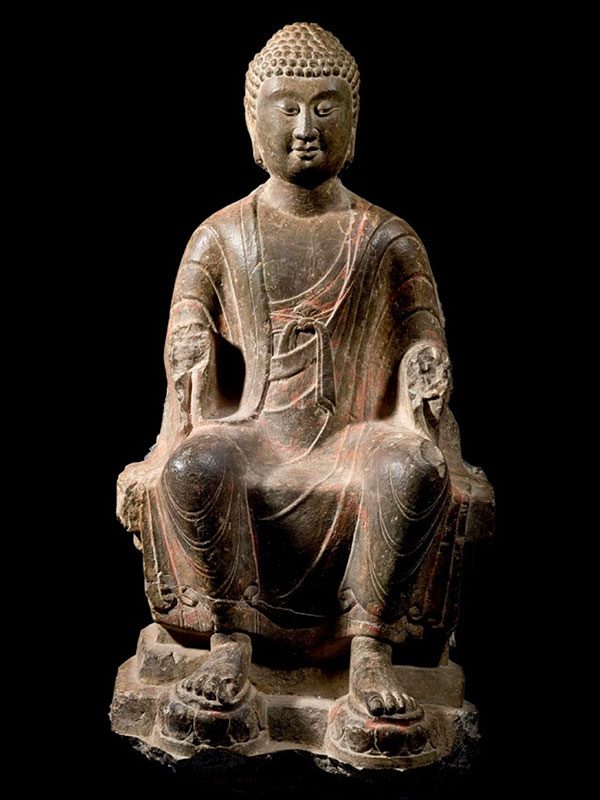 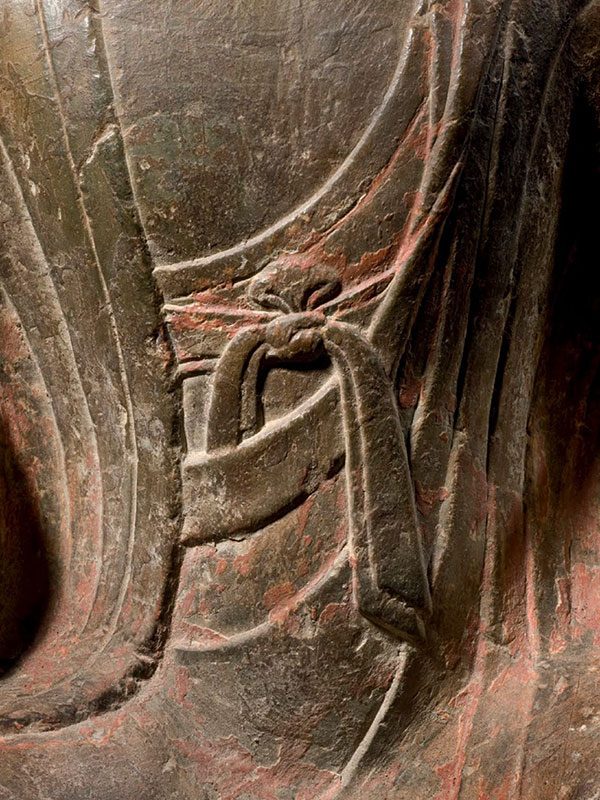 A limestone sculpture of Buddha, sitting on a rectangular throne with his legs bent and his feet resting on two upturned lotus pods. The Buddha is dressed in layered robes that cover most of the body and arms: an outer robe is loosely draped, falling into elaborate and rhythmic pleats on the shoulders and at the hem; an undergarment is neatly tied up with a sash in the middle of his chest. The head is crowned by a prominent cranial protuberance and covered in tightly coiffed curls. The face has a benign, compassionate expression.  His slightly rounded face has half-opened, downcast eyes, a strong, aquiline nose and a small, pursed mouth. The Buddha has long, flat earlobes. The bare feet are revealed underneath the pleated hem of his robe and each rests on an upturned lotus pod. The Buddha’s forearms and hands are now missing. The grey stone is uniformly coloured and bears traces of reddish pigment. 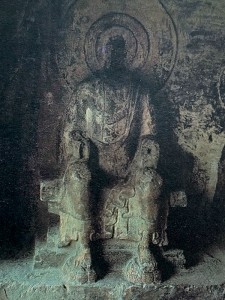 This exquisitely carved and substantial sculpture is an excellent example of Buddha Maitreya, represented seated on a throne in a posture known as pralambapa¯da¯sana (European pose), or Yi Zhou Fo in Chinese Buddhist iconography. Such Buddhist images seated in pralambapa¯da¯sana are usually identified by scholars as Buddha Maitreya, who would return to earth in the future to reach upon Enlightenment, as mentioned in the Descending Sutra.[1] The representation of Buddha Maitreya in pralambapa¯da¯sana made its first appearance in China during the Northern Liang dynasty (421 – 439),[2]  gradually becoming widely acknowledged during the Northern Dynasties (439 – 581), further developed in the Sui dynasty (518 – 618) and becoming more standard iconography in the Tang dynasty (618 – 906).[3] The Buddha, with slightly rounded face, downcast eyes and with his feet resting on upturned lotus pods, reveals some traces of the Northern Qi (550 – 577) style, but also has characteristics of the later style during the Sui dynasty. Two closely comparable limestone sculptures of Buddha Maitreya, similar in their seated postures and proportions of the body, but with their heads missing, can be found in the Xiangtangshan Caves, Hebei province.[4] One, located at cave no. 5 on the South site, is particularly similar in the design of the upturned lotus pods (fig. 1); the other is in the middle of cave no. 7 of the South site.[5]  Other examples of stone sculpture of Buddha Maitreya in similar style, dated to the Sui dynasty, are in the Tuoshan Caves.[6]  Two with a comparable style of costume are respectively in the fourth and fifth cave;[7] another Buddha Maitreya with closely comparable costume and proportions is seated in a niche in the upper left corner of the sixth cave.[8] There are some further comparable Northern Qi Buddha Maitreya sculptures: one a gilded limestone Buddha from the Longxing Temple in Qingzhou, Shangdong province;[9] one in the Tianlongshan Grottoes in Taiyuan, Shanxi province.[10] The present stone sculpture shows a strong transitional style, the characteristics of which can still be found in some later Buddha Maitreya sculptures dated to the early Tang dynasty. A further comparable limestone sculpture of Buddha, slightly larger in size and similar in the facial expression and proportions of the body, made in the third year of Xianheng reign of the Tang dynasty (672 AD), is in the collection of the Shanxi Provincial Museum.[11]