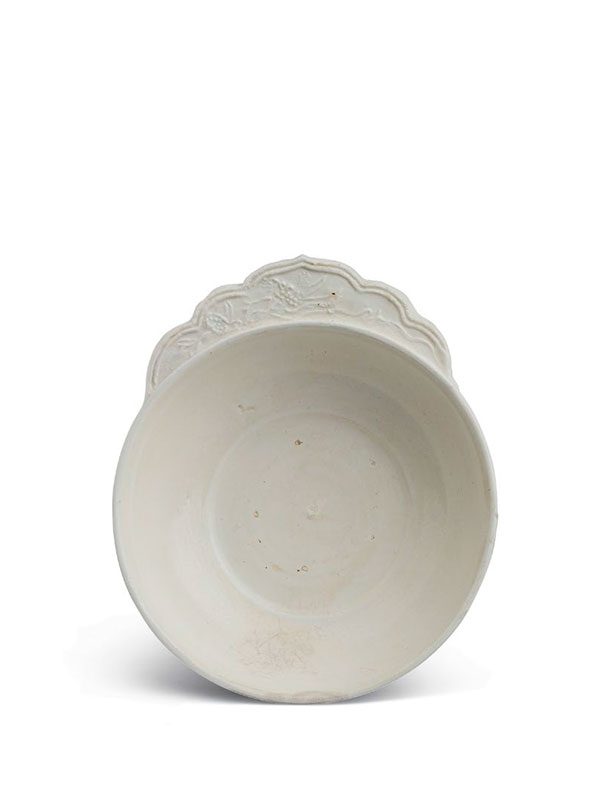 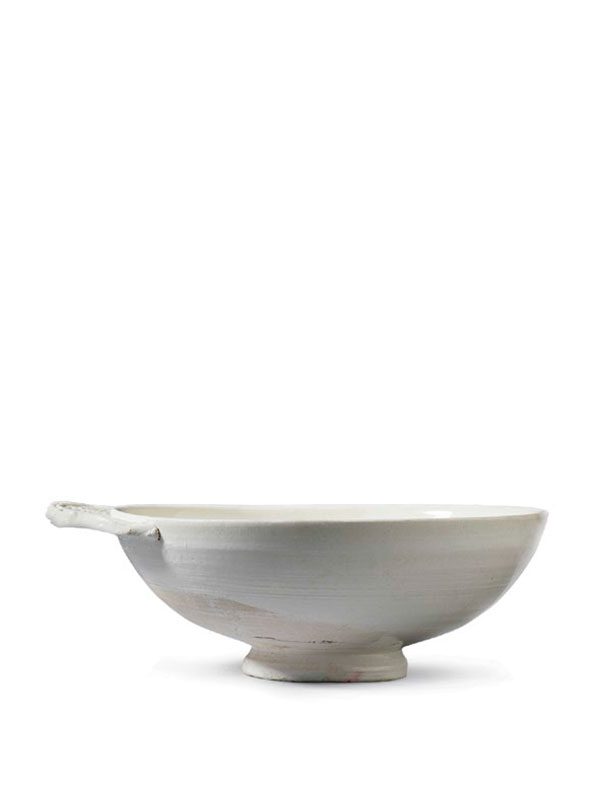 A white stoneware cup, supported on a short, tapered foot and with an ogee-shaped flange handle applied to one side. The handle is decorated with two birds in relief. The cup is almost completely covered in a transparent ivory-white glaze, leaving the lower part of the exterior and the foot unglazed, showing the finely grained clay body. There are five tiny spur marks on the base of the interior.

The flanged handle of this delicately made white stoneware cup betrays traditional Chinese forms and was probably derived from a metal prototype from a Sasanian origin during the Tang dynasty (618 – 906). This interesting shape in ceramics was particularly popular in the north of China and occurs in Ding, Jun and Yaozhou wares during the Jin dynasty, and in blue-and-white porcelains in the mid-Yuan dynasty (1271 – 1368).1  Two Jun examples of comparable form but with a ring attached underneath the flanged handle, respectively dated to the Song and Jin dynasties are in the collections of the Palace Museum, Beijing 2 and the Victoria and Albert Museum.3 The present cup, without the attached ring and with the addition of a foot rim under the base, expresses a development of the shape and a change of the function, serving as a brush washer and therefore an important implement for the scholar’s desk. A closely comparable white stoneware flanged brush washer, of similar size, proportions and with five spur marks on the inside base is in the Kai Yin Lo collection in Hong Kong.4 Such cups are identified as products from the Huozhou kiln, Shanxi province, produced during the Jin dynasty, 12th or 13th century.  The Huozhou kiln started production from the Jin dynasty and was famous in producing Ding-type wares. Another slightly smaller cup of similar form but with rougher body, dated to the Yuan dynasty (1271 – 1368), was excavated in 2001 and is now in the collection of the Shanxi Museum.5