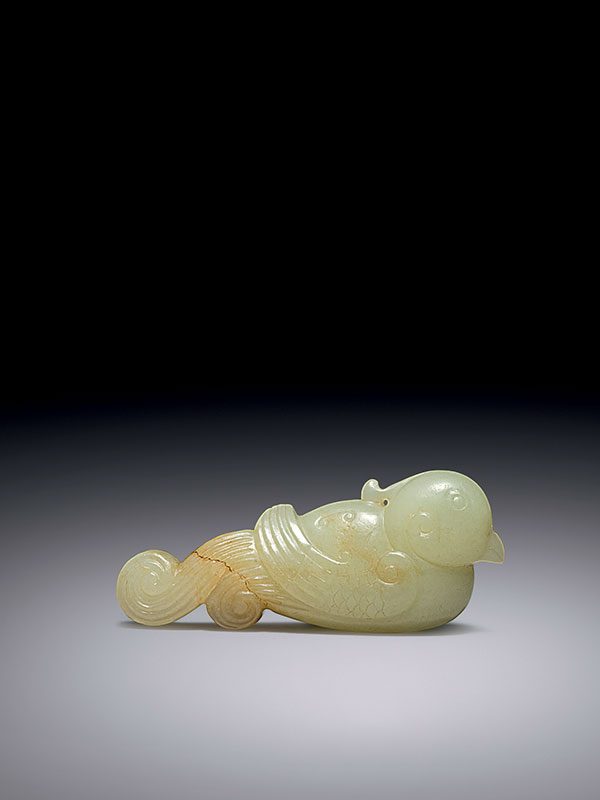 A jade carving in the form of a phoenix depicted in a recumbent position, with its grooved tail split and gracefully curled in two different directions, forming a dynamic movement. The bird looks straight ahead with a small pointed beak and round eyes carved in detail. There are large wings aside its body, which is carved in low relief with a well-defined feather pattern. The stone is of predominately yellow-hued colour, with some small areas of russet marking and a light brown coloured striation around the tail.

This delicately carved yellow jade phoenix is intriguing both for its motif and the unusual stone colour. The phoenix is regarded as the emperor of all birds, symbolising the empress of China, and ornaments her crown as well as her clothing.[1] Yellow has long been considered the most precious colour of jade in China due to its rarity and its imperial implication; ‘yellow’ in Chinese (huang) is a homophone for ‘imperial’ (huang). A closely comparable jade phoenix, similar in size and shape, is dated to the 17th – 18th century and in the collection of the National Palace Museum, Taipei.[2] This jade phoenix is stored in a Qing Court imperial ‘treasure box’, together with other miniature objects.[3] A slightly larger yellow jade phoenix, comparable in decoration and the colour of the stone, is in the collection of the Palace Museum, Beijing, where it is dated to the Ming dynasty.[4]