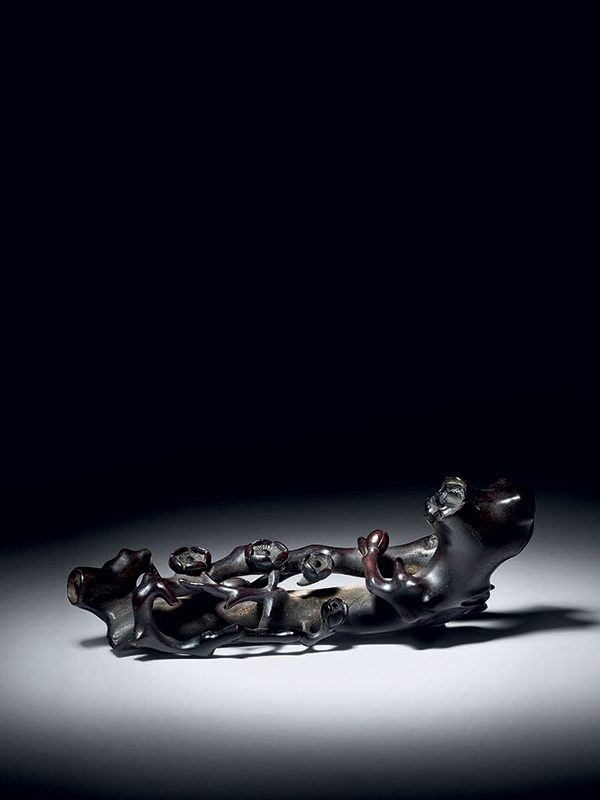 A zitan paperweight in the form of a section of plum tree trunk with gnarled branches. The tree trunk is carved naturalistically with well­defined bark and plum blossoms on branches rendered in high relief. The wood has the purplish hue typical of zitan,
with characteristic minute silvery streaks.

This naturalistically carved tree trunk is an object for the scholar’s desk and was possibly used as a paperweight. Zitan (‘purple  sandalwood’) is the most dense and slow growing hardwood  used to create objects for the scholar’s table. It was not until the beginning of the 18th century that zitan was used in the production of furniture and other objects. Even so, zitan occurs rarely which is probably due to size limitations and the delicate nature of the wood. Blooming on withered old branches, the plum is not only a welcome sight in winter but also represents renewal and heralds spring. A branch of plum blossoms is a pun for “May the blossoms bring you the Five Blessings  (meikai wufu)”, as the five petals of the plum blossoms bear the blessings of longevity, wealth, health, love of virtue, and a peaceful death.[1]  A zitan vase in the form of a section of tree trunk and carved in high relief with plum blossoms and bamboo leaves, dated to the Qing dynasty and probably used in the scholar’s studio, is in the collection of the Palace Museum, Beijing.[2]