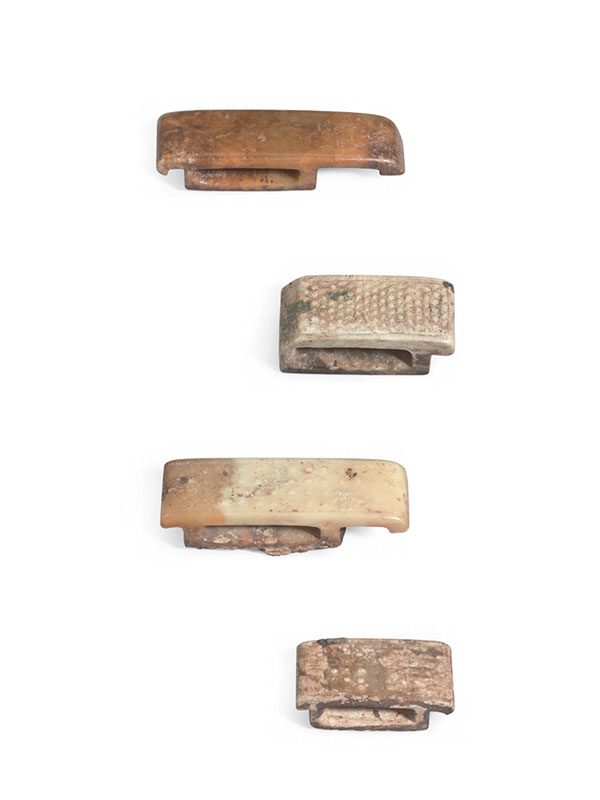 Four jade scabbard slides of conventional form, each carved as a rectangular block of different sizes and proportions. The slightly curved tops of these four pieces are respectively carved in low relief with raised dots, cross-sectioned patterns and C-shaped volutes outlined by sunken lines. A rectangular loop overhangs the surface underneath. All scabbard slides are of greenish or yellowish celadon tone and show areas of white and red veining with some crystalline inclusions.

The combination of weapons and jade has existed since the Shang dynasty (c. 1600 – 1046 BC). The power of jade may have enhanced the force and protection afforded by the weapon; weapons decorated with jade may have been thought to confer resistance to death and decay. On the fully developed late Eastern Zhou and Han swords there might be four or occasionally five jade fittings, including a round pommel ornament, an approximately triangular guard decoration, a trapezoidal chape on the scabbard to prevent the weapon tip piercing it, and one or two slides on the scabbard for attachment to a belt.[1]   A closely comparable jade scabbard slide of celadon colour, decorated with C-shaped volutes outlined by sunken lines and dated to the Warring States period, Eastern Zhou dynasty, is in the collection of the Palace Museum, Beijing.[2]   Further comparable celadon jade scabbard slides, dated to the Eastern Zhou or Han dynasty, are in the collection of the British Museum (fig. 1).[3] A Western Han example decorated with raised dots was excavated from Nanchang, Jiangxi province and is now in the collection of the Jiangxi Provincial Museum.[4]