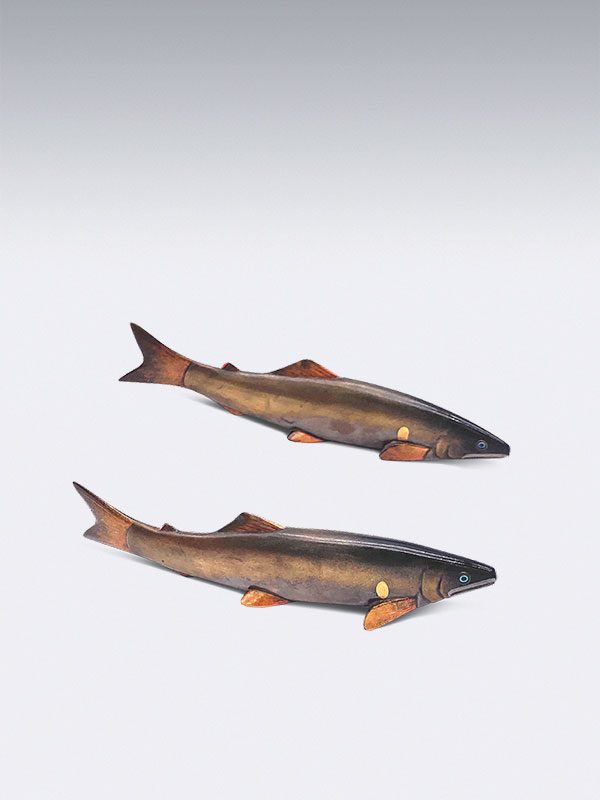 Pair of lacquer Ayu or sweetfish by Seishu

A pair of lacquered wooden models of fish, ayu or sweetfish, each depicted in different swimming positions with detailed fins and tail. The eyes are covered in bright blue lacquer. The skin of each fish is naturalistically lacquered to show an almost metallic sheen. Each fish is signed on the base with the three-character signature of the maker: Seishu.The two fish are contained in silk pouches that are stored side by side in their original wooden storage box, tomobako, which has an inscription on the outside of the sliding cover reading kibori, makie, ayu, ittsui (wood carving, makie lacquer finish, sweetfish (ayu in Japanese), a pair) and another inscription on the inside of the cover, reading Seishu saku with seal Seishu.

Seishu can also be pronounced Kiyohide. The sale of a polychrome lacquer low screen with plovers, signed Kiyohide, was reported by the Gazette de Drouot.[1] Native to East Asia, ayu or sweetfish are amphidromous, meaning they move between coastal marine waters and freshwater lakes and rivers. The name “sweetfish” refers to the distinctive, sweet flavour of its flesh. The ayu is the prefectural fish of Gunma and Gifu Prefectures.