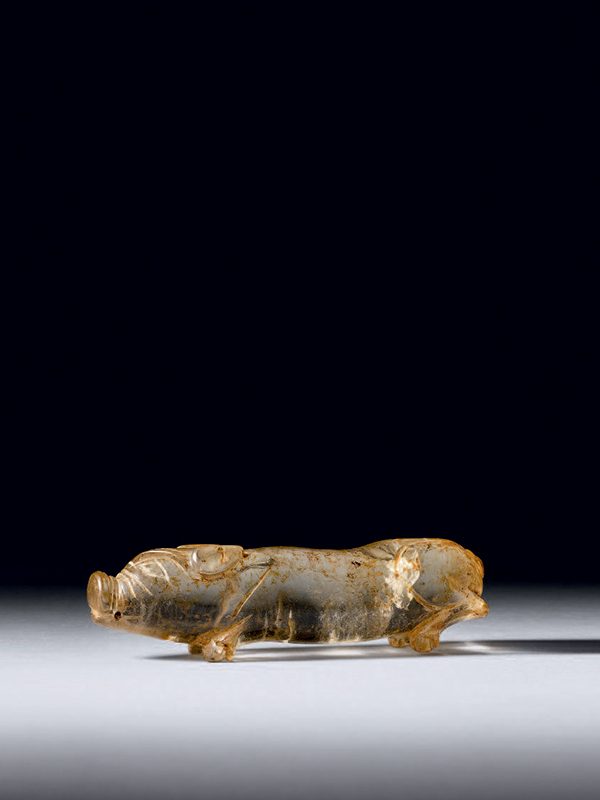 A rock crystal carving of a recumbent pig with elongated body, supported on four short cloven hooves. The animal’s back is slightly curved to form a ‘S’ shape profile. Its eyes are incised with lines, and its pointed ears are carved in low relief. It has a wel-defined, short, slightly raised snout and a small hole is drilled through the middle of the mouth. Its short tail is curled neatly around its rear haunches, with a hole drilled through the middle. The clear crystal has some russet markings.

This exquisitely carved animal figure is a rare example of Han rock crystal carving. More commonly made of jade and used as burial accessories, such pig carvings symbolise wealth and were normally put in tombs in pairs and held in the hands of the deceased, so that their wealth in the next life could be assured. From only a few precise and well.defined incisions know as the ‘eight cuts of the Han’, an abstract but clear image of the animal results. Examples in jade are much more prevalent and it is very rare to find pigs made of rock crystal. Two pairs of rock crystal pigs, dated to the Eastern Han dynasty and with a slightly shorter body, are in the Taoshi Zhai Collection.[1] A closely comparable standing jade pig carving of otherwise very similar, realistic form, was excavated from the Dongyuan Tomb no.1 at Bozhou city in Anhui province in 1973, and the tomb has been identified as the tomb of Cao Song, father of Cao Cao, the Emperor Wu of Wei.[2] A jade pig with much simpler carving from the George Eumorfopoulos Collection, described as a shroud weight, is at the British Museum.[3]